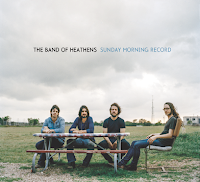 The Austin-based Americana group, The Band of Heathens return with their fourth studio album, “Sunday Morning Record,” which is exactly what the title suggests. The smooth vocals and storied lyrics are enhanced by their wonderful musicianship in this perfect album for Sunday mornings.
At times, the new album sounds like a long, lost Elton John album from his “Tumbleweed Connection” era as the Band of Heathens have a timeless quality to their music. The song “Caroline Williams” sounds like a breakout hit single, while “Miss My Life” chronicles how the band felt during the recording of this album. Their music and song-writing hit new heights on “Records In Bed” as the song adds a layer of funk to their Americana sound. The wonderful harmonizing on “Since I’ve Been Home” and the country-blues of “One More Trip” shows all the reasons why The Band Of Heathens’ new album should be near the top of every critics “Best Albums of 2013” list. The album closes with the six-minute story that pays tribute to their home state in “Texas.”
The Band of Heathens will release their new album, “Sunday Morning Record” on September 17 through their own BOH Records. They are hitting the road just after the release of their new album. The tour concludes in mid-October with performances at the Austin City Limits Festival. To find out more, please visit bandofheathens.com
POSTED BY JP’S MUSIC BLOG
You might also like
One of the following
The Band of Heathens Unveils New BoH Bootlegs Site
The Band of Heathens Celebrate 15 Years of Making Music Together Texas Run
The Band of Heathens’ New Album ‘Stranger’, Out Now
Shows by Year
2017 2018 2019
News

Interview with Gordy in the Houston Music Review