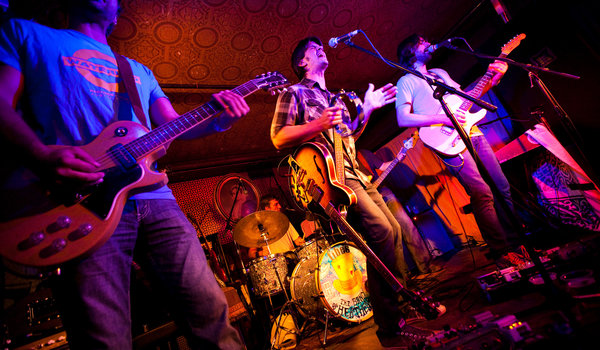 Saddled Up for Serious Strumming
Michael Nagle for The New York Times
By NATE CHINEN
Published: August 4, 2011
The air was getting thick downstairs at Union Hall in Brooklyn on Wednesday night, and the members of the Band of Heathens were making themselves at home. Ed Jurdi, seated at a keyboard, was belting a Southern soul number called “The Other Broadway,” in his high, tremulous rasp. Colin Brooks, at the other end of the stage, attacked his electric guitar, uncoiling blues licks in a coarsened tone. Between them was Gordy Quist, blithely strumming a rhythm-guitar riff. The band played the song and then extended it, pushing an ecstatic four-bar vamp, louder and wilder with each turnaround but without ceding any control.
The six-piece Band of Heathens comes from Austin, Tex., one of the handful of American cities where a craft-minded rock group can be flush with success, and even the stirrings of celebrity, without making a splash nationwide. That last bit is a work in progress. The band has been touring doggedly in support of “Top Hat Crown & the Clapmaster’s Son,” which was released on its own BOH label in the spring, earning a midlevel perch on the Americana radio chart.
Produced by George Reiff, “Top Hat Crown” is a varied showcase, with songs by all three of the group’s front men, skirting Southern rock (“Should Have Known”), swamp blues (“Medicine Man”) and euphoric hippie jams (“Gravity”). But if the Band of Heathens is going to expand its fan base, the album can only be secondary to tour dates, and shows like the one at Union Hall: hungry, unflagging and lean. Fittingly, for a group that coalesced around a weekly singer-songwriter showcase, the live show is the bottom line.
There were some moments in this show — covers of “I’ve Got a Feeling,” by the Beatles, and “Look at Miss Ohio,” by Gillian Welch and David Rawlings — that called to mind the gnash and grit of an excellent bar band. Which may sound like faint praise, though it shouldn’t. At its best, the Band of Heathens makes the material seem almost irrelevant, which is good, since its songwriting can occasionally feel gestural and glib. (Now that’s faint praise.)
One exception in the show was Mr. Quist’s “Polaroid,” from the new album. Its sunshine-pop chord progression and honeyed vocal harmonies were reminiscent of the Jayhawks, another countrified rock band with more than one songwriter in the saddle. Just as appealing, in more of a vintage Neil Young vein, was “L.A. County Blues,” an older band staple with Mr. Jurdi singing lead.
Whatever the song, the band — with Seth Whitney on bass, John Chipman on drums and Trevor Nealon on Hammond B-3 organ — hummed with purpose, loose in actions but tight in rapport. And the contrast among the three lead singers was rewarding, especially on a newer song, “Gris Gris Satchel,” that had them taking turns in the verses.
That was the song before the closer, “You’re Gonna Miss Me,” a sprawling blast of country-rock with a simple refrain. “You’re gonna miss me when I’m gone,” it went, in yelping group harmony: not a bad mantra for a band on the road.
The Band of Heathens appears on Friday at the Iron Horse in Northampton, Mass., and on Saturday at the Sellersville Theater in Sellersville, Pa.; bandofheathens.com.