SXSW and TBOH in the Wall Street Journal

SXSW and TBOH in the Wall Street Journal

SXSW this year was jammed full of great music and dark sunglasses. Some of our favorite shows were Gary Louris and Mark Olson, The Motherhips, T Bird and the Breaks, Suzanna Choffell, and the Heartless Bastards.
Check out this article in the Wall Street Journal about SXSW and see the Band of Heathens mentioned near the end.
http://online.wsj.com/article/SB123784538912618123.html

WHERE SXSW POINTS TALENT
(From the Wall Street Journal)

Austin
‘The music industry isn’t completely broken,” the hip-hop artist known as Busdriver told me, “but it’s on its way. I see some freedom in that.”… Read More by clicking below

“I’ve had some experience with major labels,” said Emily Wells, who plays viola to hip-hop rhythms and orchestral sounds. “They want to know what you’re doing all the time. They’re nosy. Now I’m entirely self-motivated. I have creative control.” 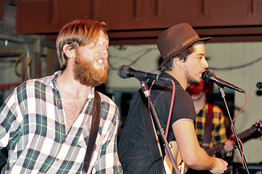 Jon Jameson and Matthew Vasquez of Delta Spirit at the festival.

Busdriver and Ms. Wells were among the 1,900 or so artists and bands who performed at the 23rd annual South by Southwest Festival held here last week. They’re both based in Los Angeles, but fans all over the world found their music on the Internet, which, for many musicians, is a distribution platform that cuts out intermediaries who may take a slice of income without contributing to the artistic process. By now, that’s old news. What artists are discovering is that, by managing their own affairs, they can control costs and make the music they want.

“Now people have access to everything, and those creating it have the ability to get it to everybody,” said Dan Dyer, an Austin resident who played a handful of shows during the festival. “An artist has to fend for himself and let the audience decide.”

The band BLK JKS, which did two shows here, had a budding global fan base before it toured outside its homeland, South Africa. “We didn’t have an album. We had no video. We still have no video,” said guitarist Mpumard Mcata. BLK JKS put its music on a MySpace page. “Early adopters,” as the band calls its fans at home, helped spread the word. “We try to figure it out in our heads,” added Lindani Buthelezi, who plays bass. “We try not to follow the other way. A target market doesn’t exist for us. Our target market is anybody who would like to listen.”
Though it may not seem so to fans who lined up outside the downtown clubs before showtime, SXSW is a bazaar for industry professionals seeking talented clients and for musicians in search of representation. As always, many musicians would be delighted to sign with any manager, label, booking agent or publisher just to be in the music industry.
Other artists know the independent route suits their style. Like Busdriver and Ms. Wells, BLK JKS doesn’t fit easily into any commercial category or musical genre. It’s recording its debut album for Secret Canadian, an independent that’s marketing the band’s EP, “Mystery.” Ms. Wells distributes her “The Symphonies: Dreams Memories & Parties” via iTunes, emusic and other online vendors. The independent label ANTI will release Busdriver’s “Jhelli Beam” in early June.
“The reality of pop in our culture has changed,” said Mark Mothersbaugh, a 35-year veteran of the music business best known as a member of Devo. “Now, instead of a monolithic list of important artists, you have a web of information. With the Internet, you can say, ‘I want to hear French bistro death metal cha-cha’ — and there’s somebody doing it. You may not find any of these people to be big icons like Mick Jagger, but you have a lot of people with interesting ideas.”
SXSW had its share of familiar names — Metallica, Jane’s Addiction, Devo, Kanye West, Big Boi of Outkast, Erykah Badu, Jimmy Webb and the New York Dolls, to name a few. Some indie acts who’ve found success were in town — including the Decemberists, who did a remarkable performance of their rock opera “The Hazards of Love” (Capitol) and allowed NPR Music to Webcast and archive it before its release this week. A few acts with a cult following may have expanded their base: Grizzly Bear and Department of Eagles, who share Daniel Rossen as a member; the Wooden Birds; St. Vincent; and Andrew Bird, among others. It was a buyer’s market for the open-minded music lover.
The fun of SXSW is running across little-known bands. Though they’ve gotten some attention backing the Black Keys’ Dan Auerbach on his solo tour, I’d never heard of Hacienda, a local quartet that plays retro-rock and R&B “well and with a lot of fun,” according to notes I scribbled when I stumbled into its set while in search of another band. Back at the hotel, I sampled Hacienda’s album on its MySpace page and downloaded it from iTunes.
I went to see Juliette Commagere, whose album “Queens Die Proudly” (Aeronaut) is an alluring bit of modern pop featuring her beautiful voice and clever percussion by her husband Joaquin Cooder. Arriving early, I caught a set by Black Gold, a New York duo. I sort of like their debut album, “Rush” (Red Bull), but they rock much harder live. For all the new mash-ups of genres, the kind of music I heard most here was Americana, and the Band of Heathens, an Austin-based group, played the best set I came across during my five nights in town.
My most unforgettable moment: Standing on a sunny afternoon behind and above an outdoor stage where Delta Spirit, unknown when its played SXSW three years ago, ripped into a set for about 200 people, many of whom sang every word and all of whom felt the sense of exhilaration and true belief that washes over an audience at a great rock show. At that moment, not one of the gleeful spectators cared a whit about who does what in the music business in 2009.
At a panel at the convention center, E Street Band member Steven Van Zandt, promoting the ossified-geezer perspective, said rock needed to be saved, adding, “Over the past 30 years, I’ve been witness to a crisis of craft” in modern popular music. But Mark Mothersbaugh told me, “The ratio of good music to bad is about the same as 30 years ago.”
Independent musicians seem to agree that chaos on the commercial side is rarely bad for a creative artist.
“The 2000s are the wilderness,” said BLK JKS’s Mr. Mcata. “There are no genres. There is nothing. It’s exciting.”
Mr. Fusilli is the Journal’s rock and pop music critic. Email him at jfusilli@wsj.com.